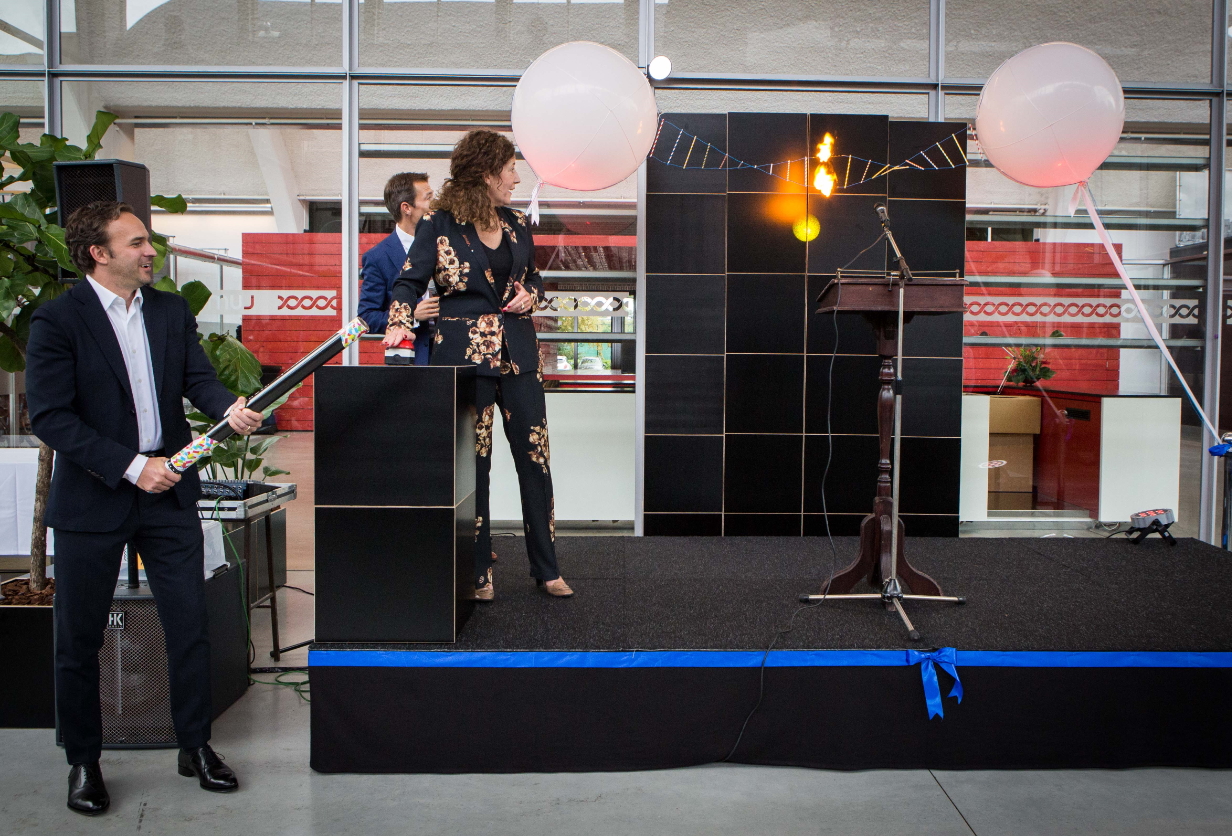 LUMICKS officially opened its new headquarters in Amsterdam with a spectacular ceremony performed by. Minister of Education, Culture, and Science, Ingrid van Engelshoven.

LUMICKS develops and manufactures high-tech microscopes that can film and measure how molecules and cells interact with each other. The company is a successful spin-off from the Vrije Universiteit (VU) in Amsterdam, where the journey began in 2014. The new headquarters of LUMICKS are located in an old bicycle factory, situated on the outskirts of the Zuidas, with large and light open spaces under high vaulted ceilings. The new 1750 m2 complex is twice as large as the previous office at the VU and is equipped with advanced R&D facilities. Rapid growth and a quadruple increase in the number of employees over the past 3 years warranted this upgrade.

“Since its foundation, LUMICKS has grown very quickly. Our turnover doubles every year, and with it our impact. Currently, we employ 90 highly educated individuals – 55% have a PhD – across 28 nationalities. They work together on further developing high-tech tools and unlocking new opportunities for biological and medical research. Customers from leading universities around the world are using the data collected with our instruments for ground-breaking discoveries that are published in high-impact journals such as Nature, Science, and Cell,” said Olivier Heyning, CEO and co-founder of LUMICKS.

In her opening speech at LUMICKS, Minister Van Engelshoven emphasized the importance of curiosity and cooperation: “One of the key ingredients for the current success lies in the research and inventions of two professors at VU Amsterdam [performed] years ago. Researchers in physics and biophysics. They had an open eye for the impact their research might have. In my science policy agenda, I stress the importance of having a culture of science in which it is worthwhile to remain inquisitive and to seek cooperation […] because only that can strengthen the impact of science.”

Prior to the opening ceremony, a working visit was attended by the OCW Minister. The rector of the VU was also present, together with LUMICKS’ founding professors Gijs Wuite and Erwin Peterman, Innovation Exchange Amsterdam (IXA VU-VUmc) the Netherlands Organization for Scientific Research (NWO), and the Ministry of Economic Affairs and Climate (EZK). Prof. Nynke Dekker of TU Delft, distinguished professor in the field of life science and client of LUMICKS, joined the conversation to discuss the impact of LUMICKS’ technology on her work.

The working visit included an interactive discussion which covered three key topics that were of interest to Minister van Engelshoven. First, LUMICKS’ founders explained the technology of their products and the societal and economic impact of the company. Next, they discussed how further development led to a breakthrough discovery that created LUMICKS’ second product line, with which the company is now entering the field of cancer research. Finally, they discussed with the Minister the impact and valorization process, and what could be improved in the Netherlands to successfully bring fundamental scientific discoveries and developments to society and the market. In the case of LUMICKS, the VU, with its “ecosystem” and facilities played a very important role in the creation and success of the company. The working visit ended with a live demonstration of LUMICKS’ technology, during which application scientists performed experiments showing how the protein complex CRISPR-Cas9 binds to DNA.

Few university start-ups are experiencing such rapid growth as LUMICKS. “There are several factors that enabled LUMICKS’ successful commercialization. Besides the obvious factors of market opportunity, technology, and a strong founding team, other factors like constructive collaboration with the VU, together with government and EU subsidies and grants have been instrumental to our success. It has been an amazing journey with tremendous impact, excitement and important learning opportunities,” said Dr. Andrea Candelli, CSO and co-founder of LUMICKS.

LUMICKS is the global leader in Dynamic Single-Molecule equipment, an emerging niche in biology research and drug discovery. Built upon innovative technologies, such as optical tweezers (Nobel Prize for Physics 2018), and STED super-resolution (Nobel Prize for Chemistry 2014), LUMICKS’ tools enable the understanding of life to the smallest detail. The company is currently developing a new technology for the measurement and selection of immune cells based on their interactions with cancer cells. This technology is game-changing for the development and application of Immune Onlcology (IO) therapies for the treatment of cancer.

Founded in 2014 and based in the Netherlands, LUMICKS was an academic spin-off from the research groups of Prof. Gijs Wuite and Prof. Erwin Peterman at the VU Amsterdam. After returning from UC Berkeley and Stanford University the two professors joined forces to create the dynamic single-molecule equipment that the company commercializes today.